Many people wondered if I did anything else than making great trips in New Zealand. Yes, my mission was to help with work on a powered exoskeleton. On October 11th I already wrote a blog post about the exoskeleton of the undergraduate group that I was supposed to use, but unfortunately it had too many problems to be used in further research. So I made a different one by myself, simpler and lighter, and below you can see the result!

Yeah, it looks pretty awesome. My colleagues in the lab started calling me "Terminator". The black tubes along my legs are pneumatic artificial muscles (PAMs). These can be inflated by externally supplied air pressure going through a system of electronically controlled valves. When PAMs are activated, the endpoints are pulled together, applying forces to the human joints, in this case my ankles and knees.

A critical part is how the system knows when to activate the PAMs, as it must be synchronous to human muscle movements to provide effective assistance. This is done with sEMG sensors attached to several locations on the skin. When human muscles are activated, very small electrical currents are measured (from microvolts to about one millivolt). These weak signals are amplified and recorded with data acquisition devices, then it is sent to my laptop where a software program filters these signals in three stages. Next, the setpoint pressure for each PAM is calculated according certain formulas, in which the parameters can be adjusted realtime by five dials and two switches on the exoskeleton itself. The setpoint pressure is then compared to the currently-measured pressure, and the valves are controlled in such a way that each PAM gets to the setpoint as quickly as possible. Sounds difficult? Yes, it is pretty complicated stuff! But I like it :) 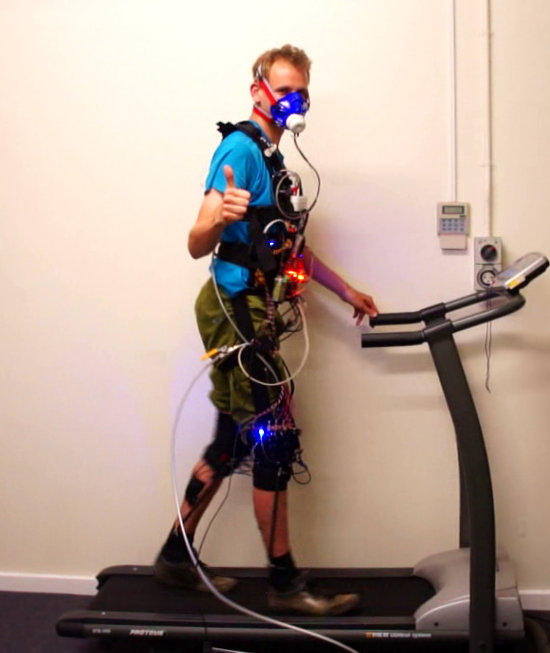 The mask is for measuring oxygen and carbon dioxide levels to determine my energy expenditure during predefined exercises, such as walking on a treadmill at 3 km/h for five minutes, or going up and down on a flight of stairs. The breath analyzer system used here is the Cosmed K4b2 device. While doing exercises, I could feel significant assistance when performing many movements. But did it also reduce energy expenditure?

So I did measurements on my energy expenditure when doing exercises without exoskeleton, with passive (unpowered) exoskeleton and with powered exoskeleton. Unfortunately, the system did not register a decrease in oxygen consumption when the exoskeleton was powered on; it remained approximately equal. But that is fine, we knew in advance that it would be very hard to get ideal results, and we were already happy that wearing my exoskeleton did not increase energy consumption!

After finishing the measurements, I wrote a paper for a conference. Luckily, in science you can still write a good paper if research results are not perfect. If the paper is accepted, I may (and will) present it at the Mechatronics conference in June in Sweden. Let's hope that it will indeed be accepted, as it would allow for some really great trips in Sweden!

Posted by Vincent Groenhuis at 23:01