January 5th. Weather was good and together with Matthias (another member of the tramping club) we headed to Mt Aspiring National Park. 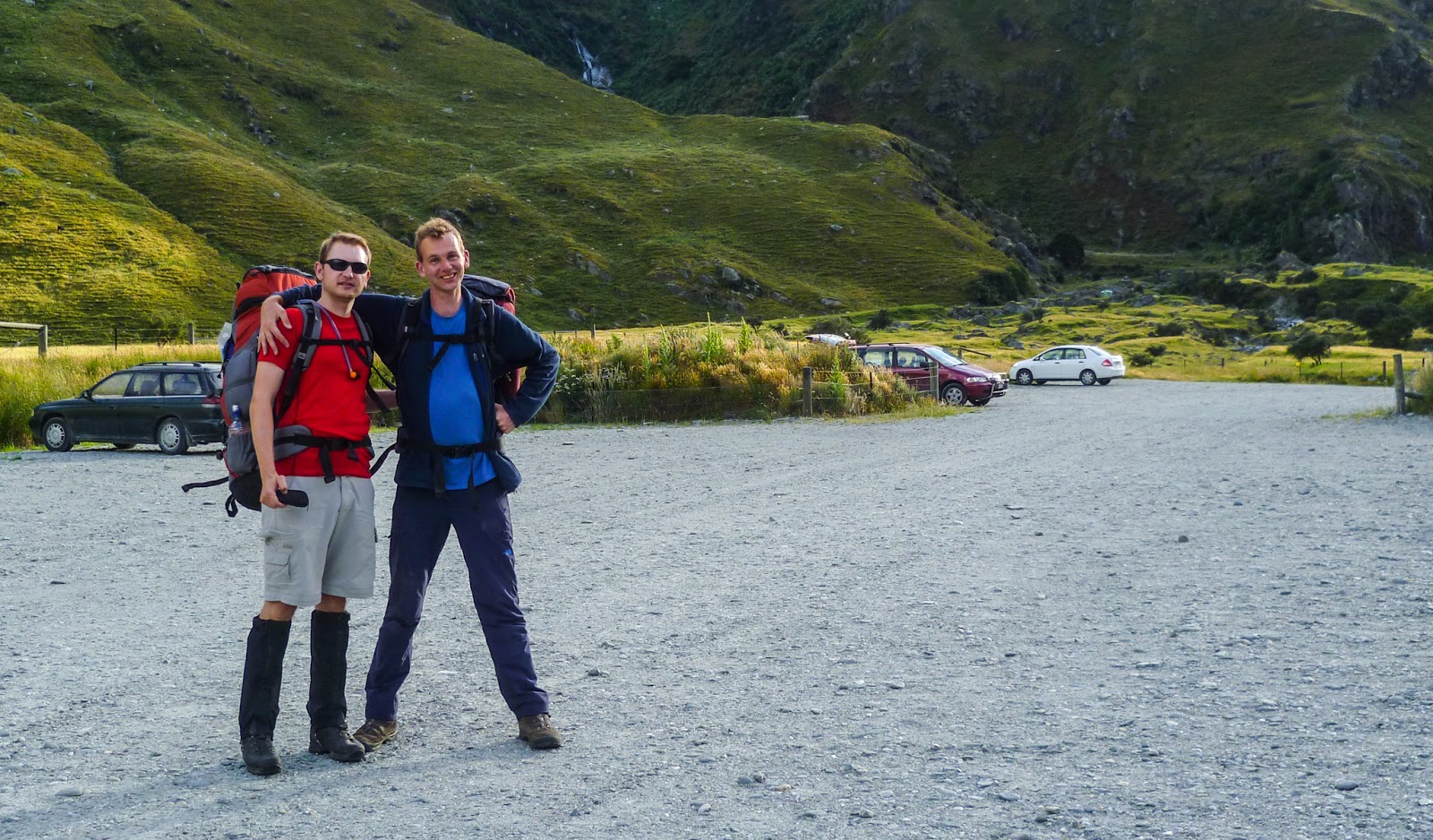 From the car park, we walked up to the Aspiring Hut in the evening an easy walk along the river. 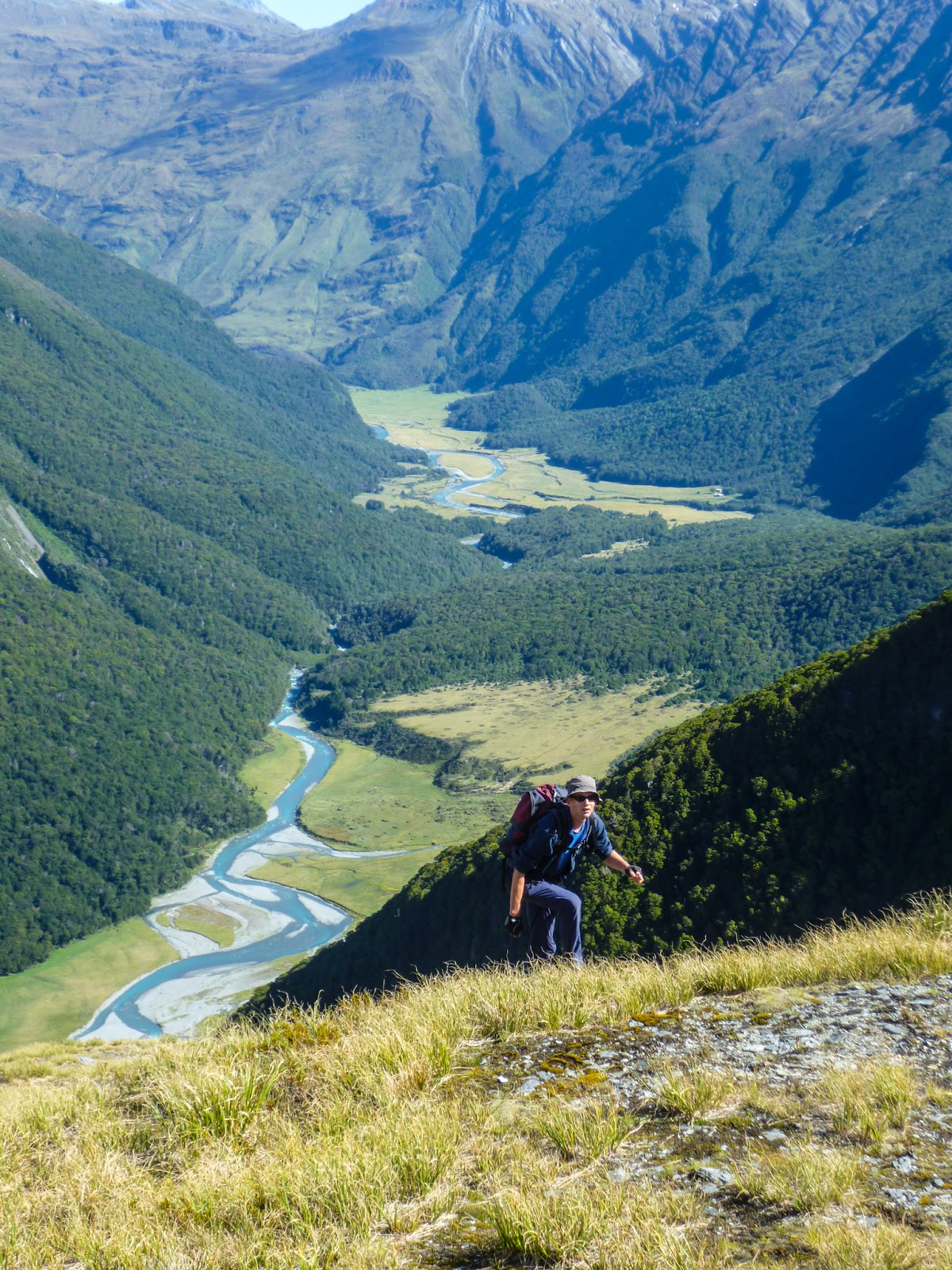 The following day we climbed up to Liverpool Hut, and after dinner we pushed a little further, climbing on a very slippery slope. My tramping shoes are getting old and at places the sole's profile is worn almost down to the structure of dancing shoes! Eventually Matthias was able to reach a higher point than me, and we both got safely back to the Liverpool hut. 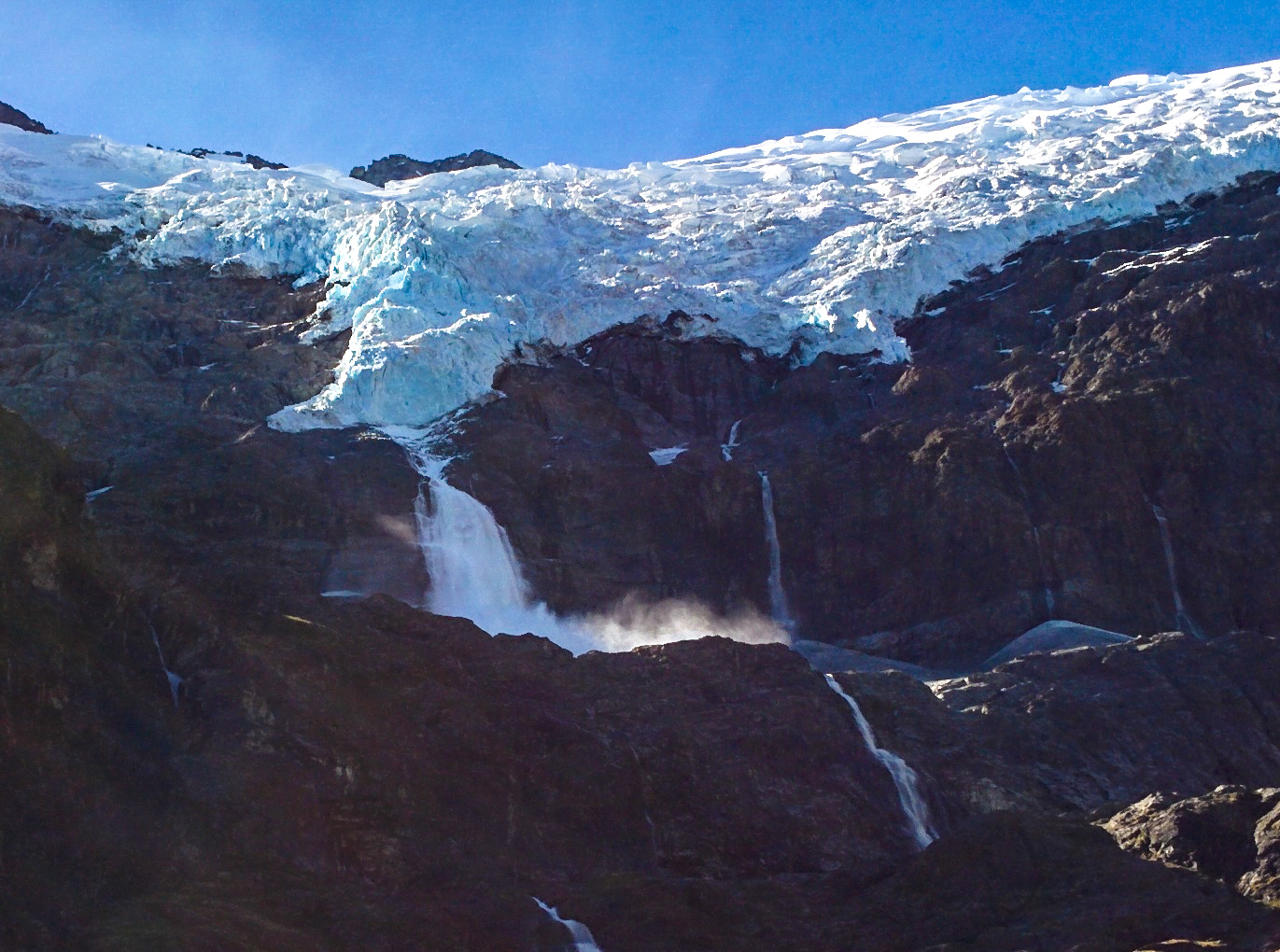 On the way back, we walked the Rob Roy side track and saw beautiful views of the glacier and waterfalls. We were also very lucky to watch part of the glacier break off in action, smashing into the pool below and causing a temporary flood. On the photo above, taken very quickly, you can still see some snow falling down! 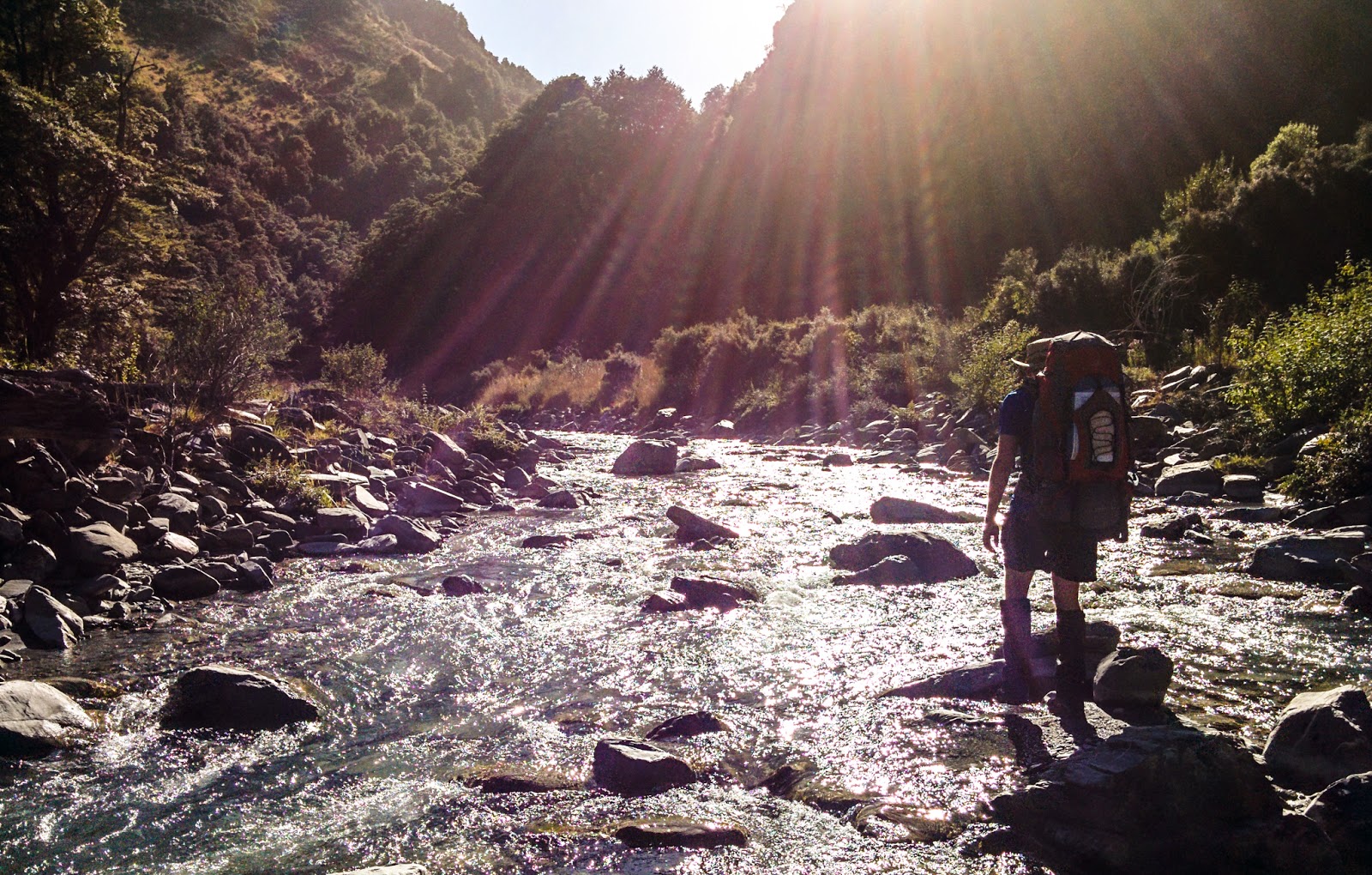 The next day, we drove to the shore of Lake Hawea and after a short night we started walking the Timaru river upstream. You can walk either on the left bank, or on the right bank, or straight through the river, and we kept switching lanes all the time to find the best way through. And we had to be careful for giant boulders which sometimes roll away when someone is hopping onto it, and for giant tree trunks which instantly crack off when you squeeze 'em a little too hard. Right, Matthias?!

Our target was for that night was the Moonlight & Roses hut. According to the NZ Topomaps, there should be a path or track from the river to the hut through the forest. So we located the start of that track by GPS, and went up in the bush. 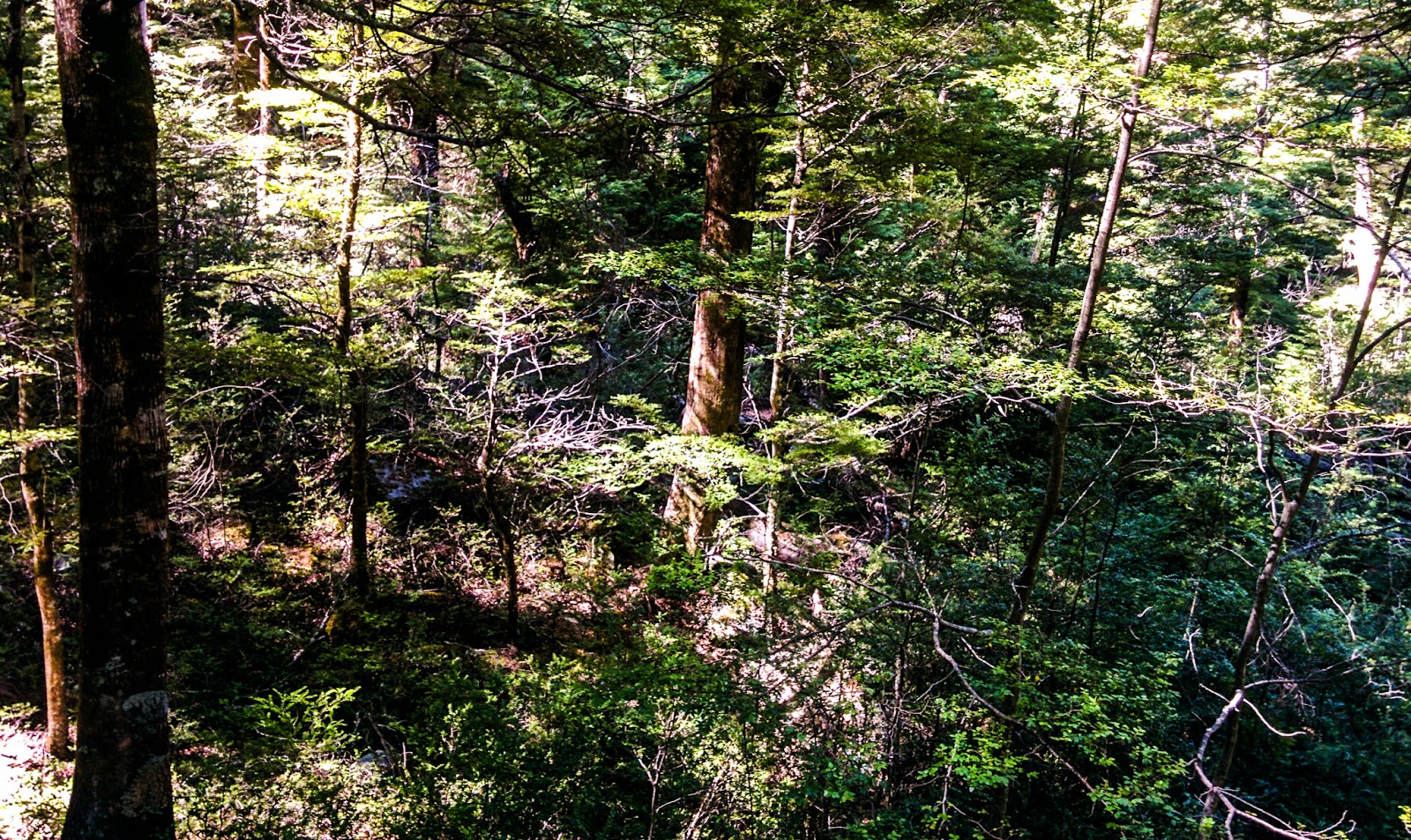 Can you see the path?! No? Right. There is no path. After a long time (and short distance) of bush-bashing through thick forest on a fairly steep slope, following the dashed line by GPS as closely as possible, we had to conclude that there is no path at all. Damn.

550 metres covered in 1,5 hour, and the hut was still four or five times that distance away. It was getting late in the afternoon and we had to assess the situation. We could probably not make it to the hut before nightfall. We investigated the possible alternatives: going straight up the slope to escape the bush as quickly as possible, or maybe following the river all way upstream to the point where it was closest to the hut. But we didn't know the terrain and either alternative might be too slow as well. So we decided to go back to the river and set up camp there. The only problem? We had no tent with us. And sandflies were already gathering... 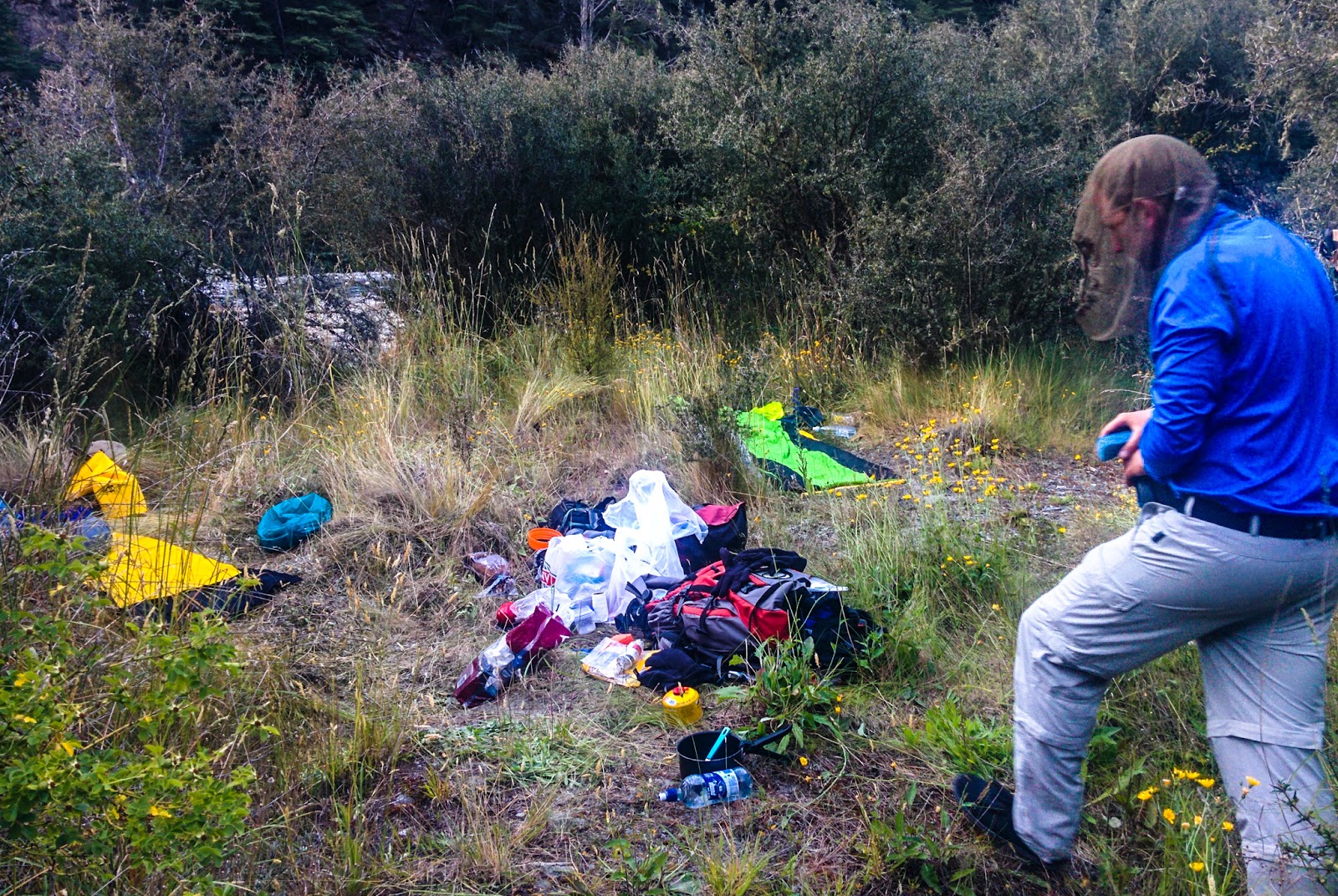 We located some flat space in the bushes along the river and unrolled our sleeping bags. We had no roof above our heads, but luckily the night was all clear and not too cold. We let our damp clothes dry in the bushes. From the place, a strong smell of two humans who had not seen a bathroom for many nights, rose up in the air. We prepared a meal, and the sandflies called in all their relatives to gather for the feast.

Matthias had packed a mosquito net, but I had none. So at first glance, he would have better chances to survive the night. One problem was that his net had two large holes, apparently designed specifically for two-headed dragons and Siamese twins, so he had to be careful that the head was covered appropiately. I myself experimented with the magic insect repellent fluid, which did work when applied on the skin, but only for a short time until it dries up. After some rather unsuccesful experiments, I took the gamble and spilled half the bottle over the brim of my sunhat and put it on my head. Wow, that makes a lot of sense! Maybe a bit too much, because quite soon I saw entire huts floating around my head. At least they didn't land on me. Tucked deeply inside the sleeping bag, covered under the magic hat, the night passed away.

The next morning, Matthias was certainly looking worse than me: he had apparently been sleeping with part of his face uncovered, and the sandflies had left their marks, leaving him with something like a port-wine stain. But he didn't know until he looked in the mirror when we got back at the car. I clearly remember his yelling then: FFFUUUUUUU....!!!! 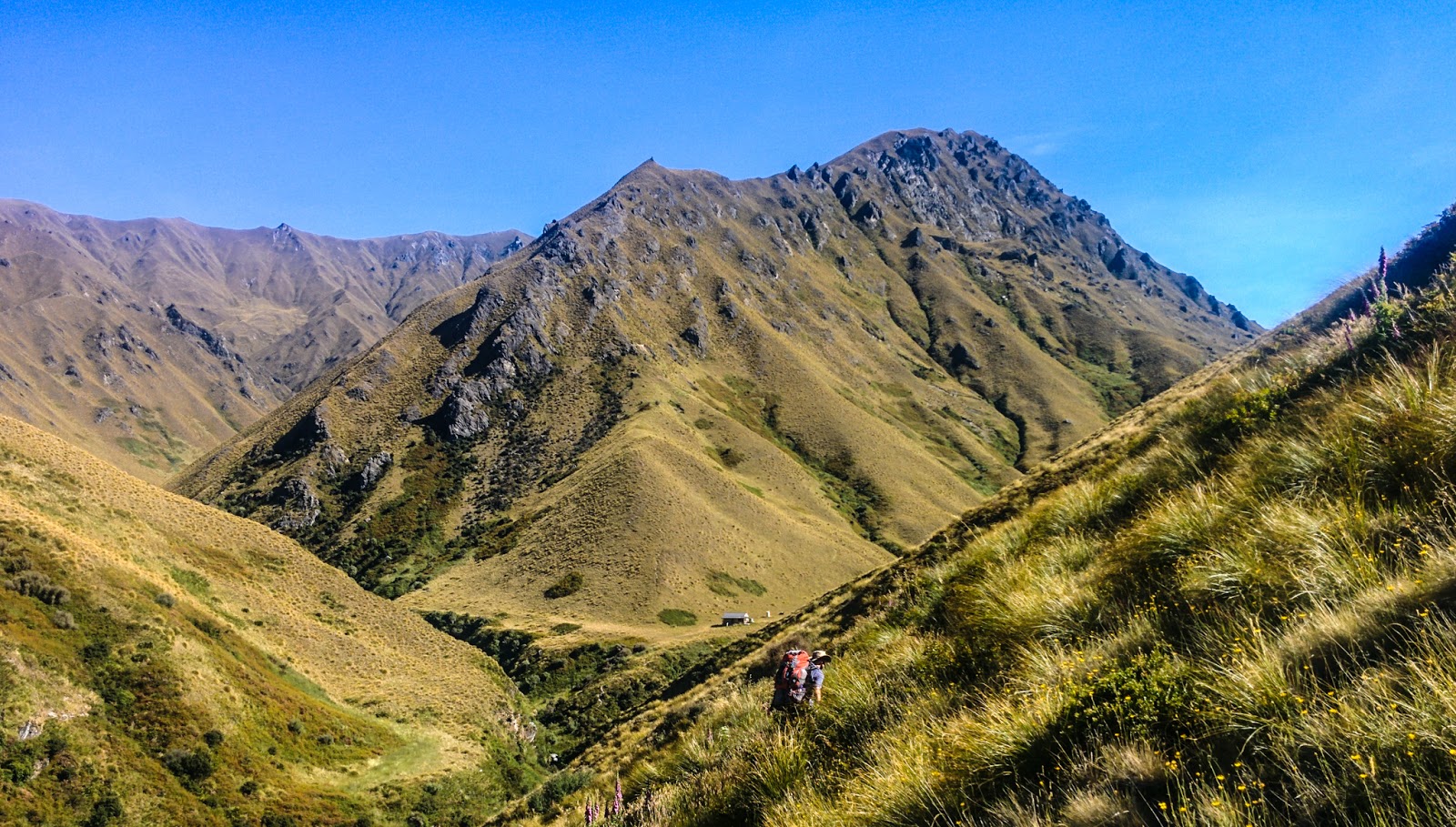 We set off for the third leg of our journey, but not before visiting the pharmacy of Wanaka and gathering up-to-date track information. This time we were sure that it was an easy walk along the Fern Burn river to the hut where we stayed overnight. 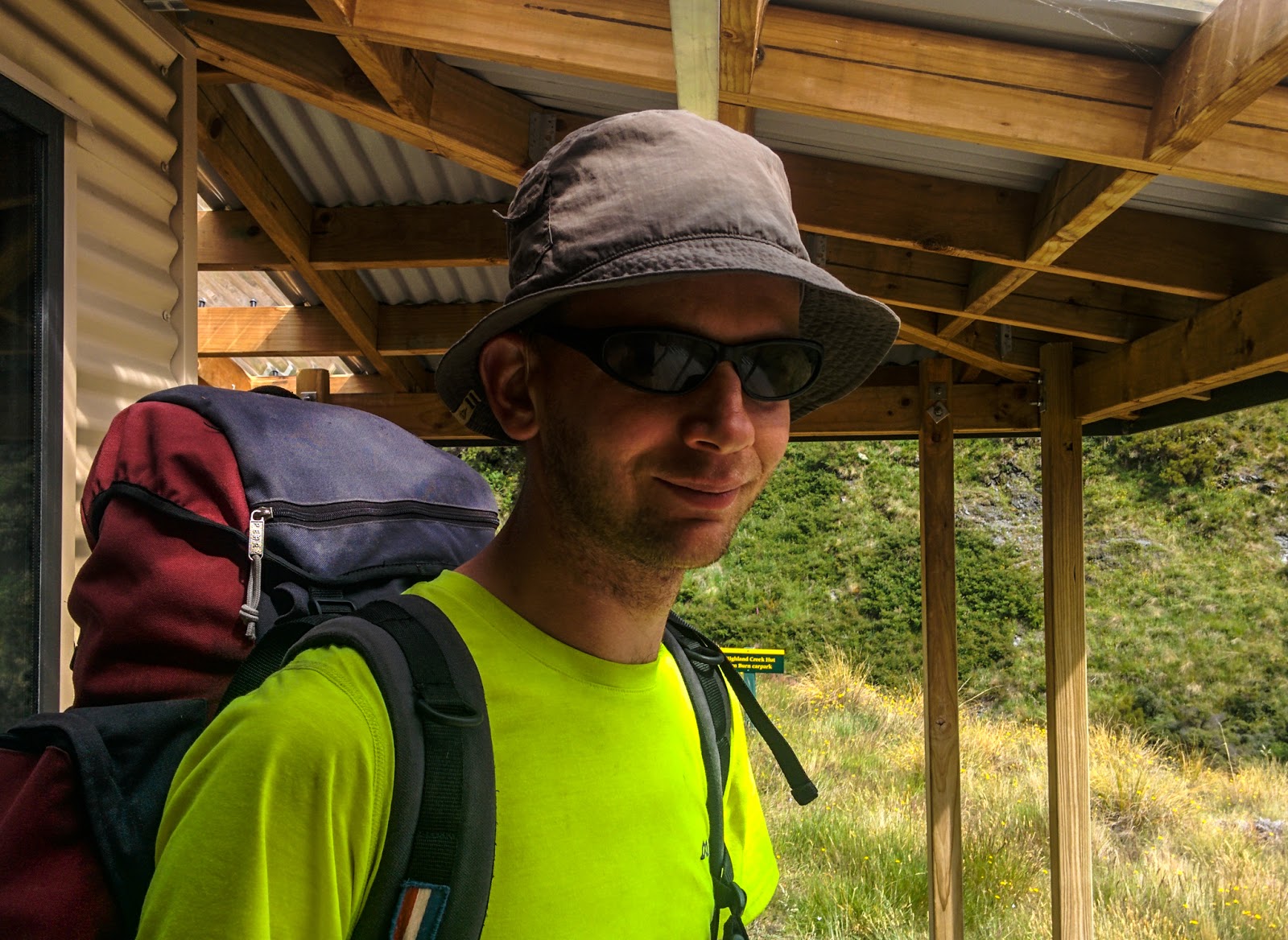 Matthias was already looking better and we returned the same way. Back to Wanaka, where Matthias took the bus back home the next morning. I myself drove to Te Anau, to prepare for the next chapter in my two-month holiday: the Routeburn Track.

Posted by Vincent Groenhuis at 07:27