Most Awesome Birthday Ever!

On November 15th, I turned 30 years old! A good reason for a birthday party, followed by a very eventful tramp! Ok, let's start from the beginning: here is the where my birthday party took place! 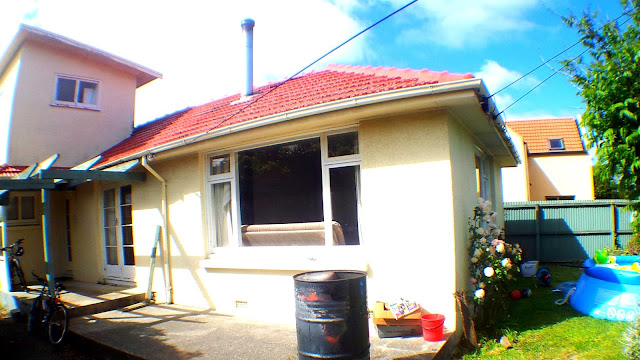 Friends from the tramping club, current and former housemates and colleagues from university found the way to the fragrance of the four cakes that I had baked in the afternoon. We drank mixed fruit bowl, beer and wine, had a laugh, made some good music and everyone liked it! 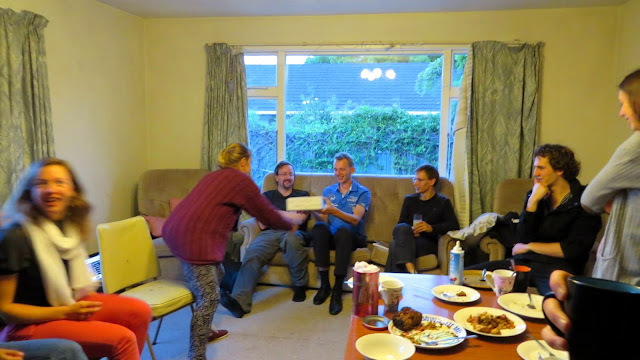 Aaaaaand, I got presents! Apparently I did something good last year. What did I got: Dutch food! Pepernoten, honingdrop, stroopwafels, speculaas, chocoladeletters and more. Mjummie! And also the New Zealand Trampers Handbook, it will come in handy! 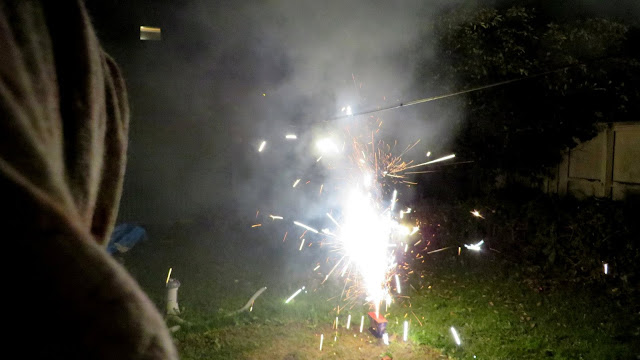 At midnight, it was finally my birthday, and everyone was singing for me! Then it was time for fireworks! We ignited quite a lot of sparkling stuff, and no one was hurt. But my birthday has just begun...

Later in the morning, a small group of seven people headed off to the Paparoa Range, a mountain range in the West Coast. I drove my Renault Clio; the first stop would be Arthurs Pass, which is on the other side of the Waimakariri river. A single-lane bridge connected the two banks of the river. I had priority and looked down the bridge, and saw no other car. Then I entered the bridge. But now I saw an upcoming car approaching fast. Too fast. I had to go back to make room for it. So I changed into reverse gear, looked and moved back.

Just in time, I thought. The upcoming car on the bridge drove away just along me. At least I had made enough room for it. I drove a little forward and stepped out. So did the Ferrari driver. We looked at the beauty and spotted a very tiny little scratch, barely a few centimeters long.

I had kissed a Ferrari on my birthday. Of all cars driving around in New Zealand, I managed to hit this beauty. The jackpot.

Then, a second Ferrari appeared, even more beautiful than the first one because this didn't have that tiny little scratch, and stopped next to the first one. I can't remember having seen a Ferrari in real before, and now two are exclusively greeting me for my 30th birthday. Amazing! And I shook hands with the driver, which appeared very gentle after all. A magnificient encounter, let's say.

Oh and yes, I have a good vehicle insurance, though I probably won't need it after all. The owner has its own workshop and might as well fix the microscopic mark himself. To have any use of the insurance, I would have hit the beast much harder. The expression on the face of the other half of the tramping group when we told about this, it was priceless! And the birthday tramp has not even started yet...

Croesus Track. Originally it was called Garden Gully, but when a lot gold was found, it was renamed to the Greek king Croesus who had been swimming in the gold. We shuffled cars (my car to the Moonlight Creek, and with Niko's back to the starting point Blackball Smoke Ho) and set off. The Croesus track is an easy track, ideal for people new to tramping. About halfway, Niko and me joined the rest of the group and together we headed to the Ces Clark Hut, where we stayed overnight. 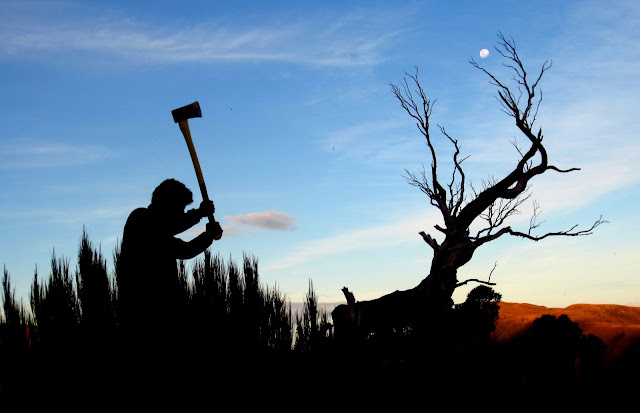 We chopped some firewood for the fireplace. Yanni felled a whole dead tree, and Niko chopped it into smaller pieces. I also helped chopping it for a brief time. But after handling the heavy axe, a log of dead firewood is much lighter than expected and I swung this blindly with a little too much force uphill towards Niko, which didn't look either. So it was that the log crashed on Niko's head. Blood flowed over his face. What had I done?! Luckily, Niko quickly recovered from the wound, and already continued chopping the rest of the firewood a few minutes later.

Crashed into a Ferrari. Crushed a log of firewood on Niko's head. Three more hours before my birthday would be over. I was already looking forward to it... 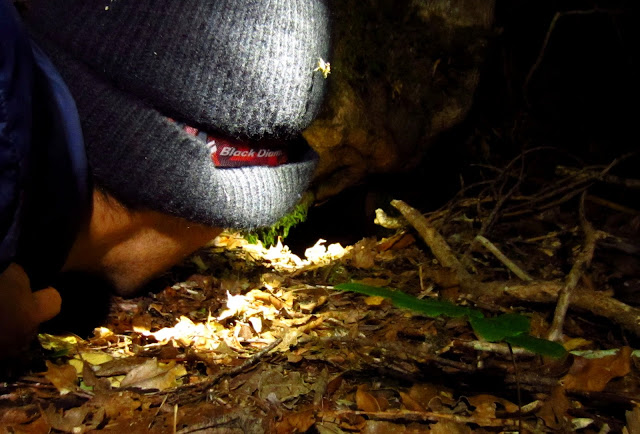 Sun disappeared and Moon rose in the sky. On the edge of the night, we walked down to the forest, listening to the sounds and looking for animals. Especially Niko had a keen eye for interesting species. He could recognize many birds, and ticked off which he had seen in his book with New Zealand birds. One of the missing items was the Kiwi. And here, in the Paparoa Range, there are Kiwis.

We knew they would be hiding under tree roots, and after a while Yanni had found one Kiwi hole. We peered inside, and saw the long thin beak of the Kiwi hiding in it! We set up strategic positions and turned off our lights and waited half an hour, but it did not come outside. Never did we see more than the beak, tongue and one feather of the Kiwi. But it was something! 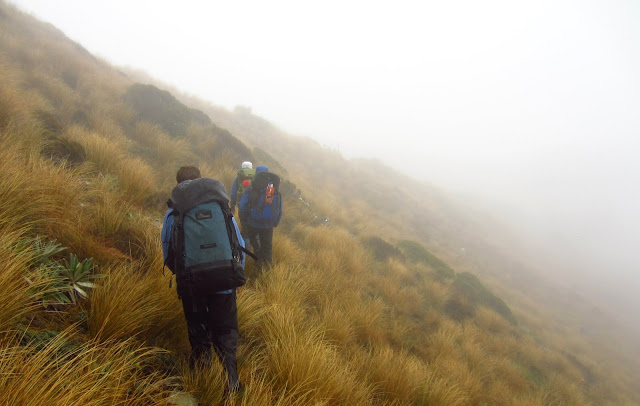 Next morning, clouds rolled in and it was all wet and foggy. But nevertheless we went ahead with our original plan: to follow the Moonlight track in the mountains. Actually it is a series of poles (placed very far apart), and we had to find a way through the shrubs and rocks ourselves. In general we had to follow the most important ridge, but in the thick mist we were often not sure about our direction. We looked at the maps, we checked the compass, we used the GPS on our mobiles, but we made only slow progress in the rough terrain. Eventually we decided to camp on a relatively flat surface, hoping for better weather on the following day.

So it was that on the day after my birthday, we were camping in tents on some mountain ridge in the middle of nowhere, lost in fog and wilderness, far away from home. We ate pumpkin soup, rice with vegetables and my grandmother recipe's tutti frutti, which warmed our bodies. 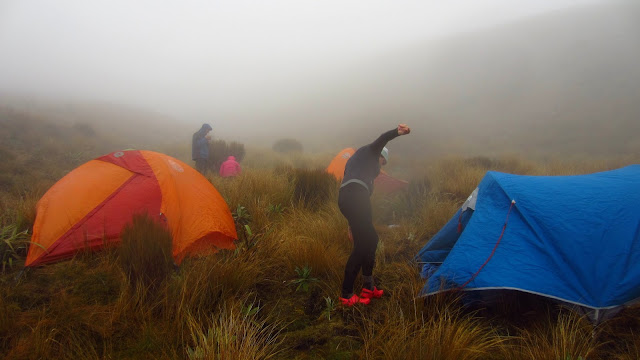 The next morning the clouds had cleared up a little, and we could see one pole guiding the Moonlight track again. Apparently we had camped just 75 metres from the pole. We now had two options: proceed with the Moonlight trail, or go the longer way back to the starting point of the Croesus track. A really adventurous group would have pushed on, but we did not want to take risks as more clouds were already rolling in. So it was decided to go back to the hut, where we warmed ourselves again at the fireplace.

Rain fell down in the forest. So, that's why it's called a rainforest?! But we were well equipped and nothing could remove the smiles on our faces!

Back down, we still had to fetch my car from the Moonlight Creek. But first Niko managed to stuffed all seven trampers plus backpacks in his car (just some average Nissan station wagon). Don't ask me how, but he also drove it down over the muddy 4wd track to (formerly) The Blackball Hilton, and everyone survived! 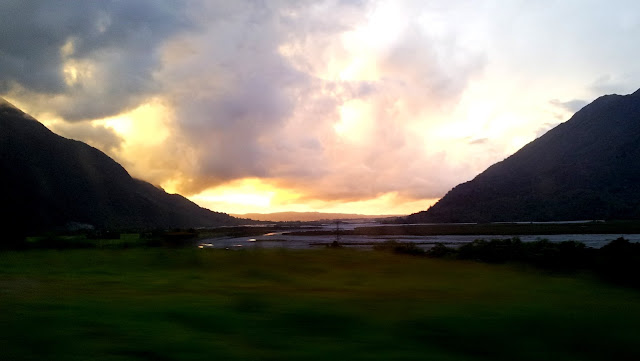 Sun was already in its golden hours when we finally left the West Coast. Arthur's Pass was all covered in thick fog, but mist lamps were very effective in the darkness of the night. We finally arrived back home around 23:00.

The Ferrari. Lost in the mist. Niko's head. My birthday party. Things I will never forget! And now sleep...


Posted by Vincent Groenhuis at 13:30