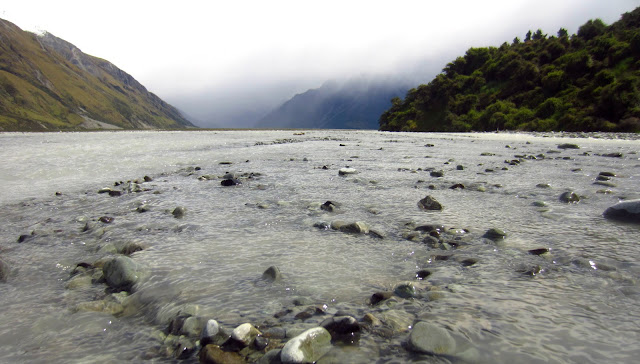 White water rushed through the braided river, and our knees had already disappeared in it. With mutual support, we acted like a six-legged beast moving very slowly through the stream.

Was it here that Niko, in upstream position, suddenly realized he had his wallet, with a table surface full of notes, ID's and licenses, was still in his pocket? He staggered, the mobile phone in his other pocket gave a faint hiss and bricked. But Dominik and I stood firm, and pulled Niko back upright. Now we formed a stable triangle formation in the middle of the stream, and I thought: how in the hell did we enter into this horrible situation, far away from our safe homes? Well, let's start from the beginning...

Saturday, November 30th. A rainbow of colors surrounded The Warrior on Saturday's rain forecast charts. Only Niko, Dominik and me were not impressed by this and headed towards it. Better start in storm and return in sun, than the other way around, I thought. But when we reached Erewhon Station, blue sky was greeting us; the depression had slightly changed course and was now north of us. 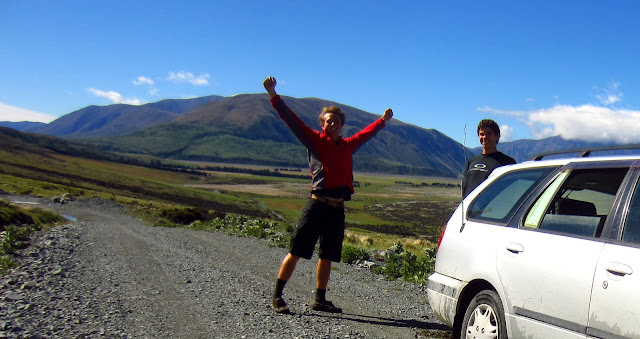 Here you see Mt Sunday, which was transformed into Edoras for the the movie Lord of the Rings: Two Towers. But it's just a little hill, so we were not interested in climbing it. Instead, our target was The Warrior, with 2584m being the highest peak of the Armoury Range. 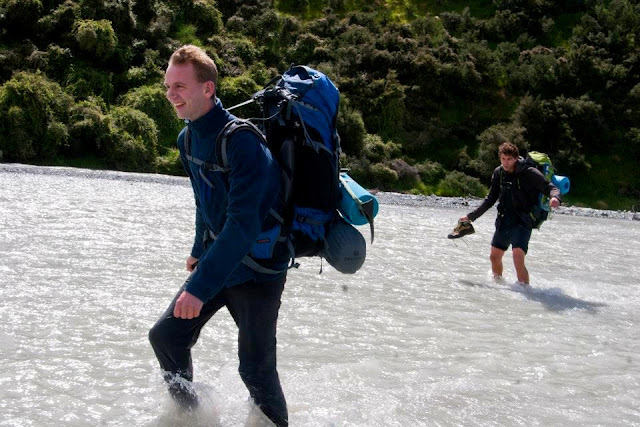 Following an article Niko found, the plan was to walk up the Clyde River, past Black Bluff, up Sinclair River towards Rock Bivouac and head to Crossbow Saddle from where we could see The Warrior. The first leg to Black Bluff was said to be boring, and it was suggested to bring a MP3 player with some rock music. But The Warrior did not feel like to let us approach him so easily...

Rivers in New Zealand kill four people each year, and Clyde made clear that she had not reached her quotum yet. It is a braided river, so it continuously branches off into different smaller streams which later merge back on. Many of them could be crossed easily, but some were incredibly tough. 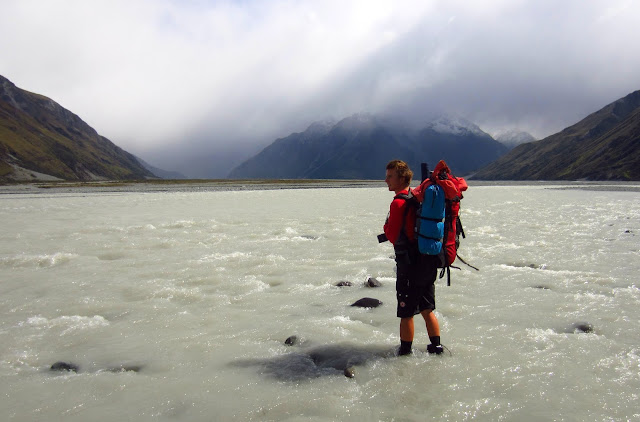 We lined up for one difficult crossing. "Gosh, it's getting deep here!", "Let's go back!", "Go on, it's not far!". So that's how we found ourselves back, thigh-deep, in the middle of a stream which was pondering on our legs and already took the life of Niko's phone.

Back in line formation, the six-legged beast did one step forward. Then another. Sun broke through the clouds, the wind eased and we were on the other bank, greatly relieved. But soon we found out that there were more fierce streams around us. We moved upstream, crossing a few smaller streams, but eventually found our way blocked by fierce streams which were too dangerous to cross. We wandered downstream, but found no way to reach the other shore. Trapped on an island in the middle of the river? We shall see...

We halted and I examined the water level for some time, estimating if (and how quickly) the water would rise and calculating how much time we would have left before the island would be completely flooded, knowing that it would probably take 90 minutes to summon a helicopter with the PLB in my backpack. 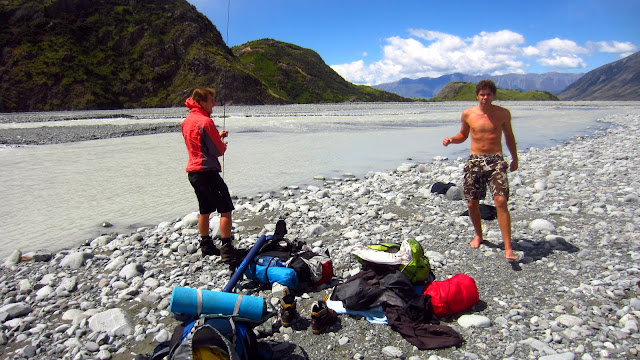 The other two had a totally different view on the seriousness of the situation: Dominik laid out his wet clothes and went sunbathing like it was a luxury holiday resort. And Niko, well, was fishing in the river to get a decent meal for the night.

After an hour or so, the water level was still the same. We walked along the east side of the river, and eventually found easy spots where we crossed the river back to the eastern bank. Now we were exactly where we started: at Erewhon Station. After three hours of crossing rivers, we had made zero progress. We lost the first battle to The Warrior, but the war was not over yet. 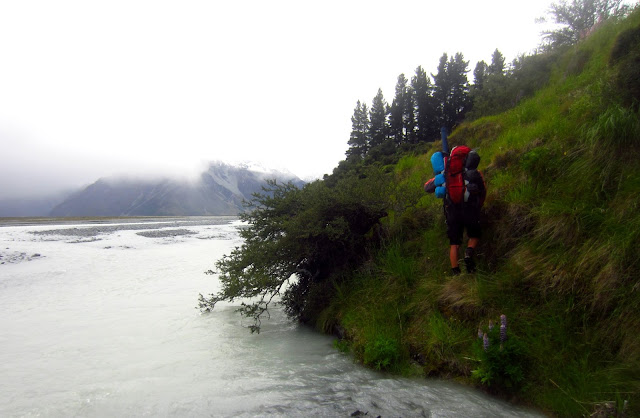 We now tried a different route by ascending the hill on the eastern shore, and traversed northwards through the bush. After two more hours, we were well beyond the difficult river section and again marched over the river bank. The road to The Warrior was now more or less open. But we had only covered two kilometres in five hours, and I calculated that with this average speed we would need four days to reach the Crossbow Saddle. We didn't have that much food, so we hoped that Niko would catch a really big salmon for us quickly.

We walked past Tank Gully, a little stream flowing through a beautiful canyon. We liked its look, and decided to enter it as we had no chance to get anywhere close to The Warrior anyway. A short time later we found a relatively level patch of grass on the slope. Evening was coming, so we decided to camp here. We set up one tent and secured the lines really well with our ice axes. But after a few fierce blasts from The Warrior, the tent more or less lay flat. We found out that some velcro tape had to be attached to the poles at the inside of the tent, quadrupling the structure quality. 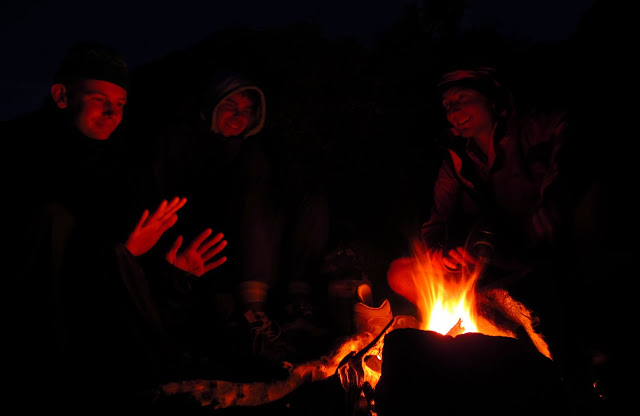 We lit a campfire and three rounds of really good spaghetti went down our throats. Niko had not caught a single fish, so we roasted his socks instead. He didn't seem too happy with the burn hole, but the warmth of the campfire blessed our minds and bodies. Sun sank down behind the mountains, and Venus was seen twinkling in the sky among many little stars. The Warrior was restless during the night, howling winds jiggled the tent until the crack of dawn. But it stood firm all night. 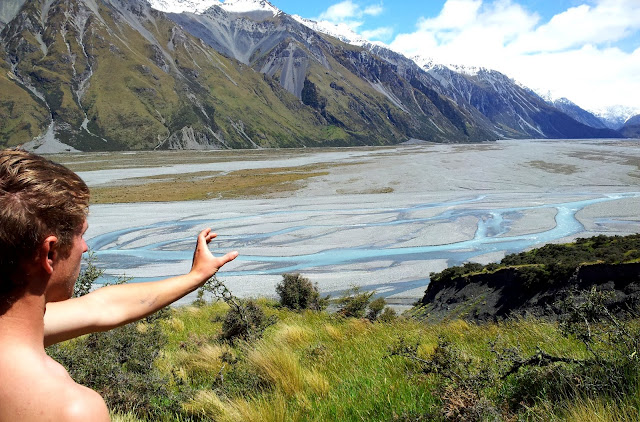 In the morning, the roaring Clyde had turned back into a calm, blue river. The mountain tops were no longer covered in clouds, and could now be seen in full beauty. We packed our stuff and ascended Mt Caroline, a gentle hill close to Erewhon Station. Dominik and I sat down comfortably at the top, while Niko climbed one of the peaks of the Potts range. From there, Niko could see Mt Warrior, the mountain we tried to get to, but we failed. 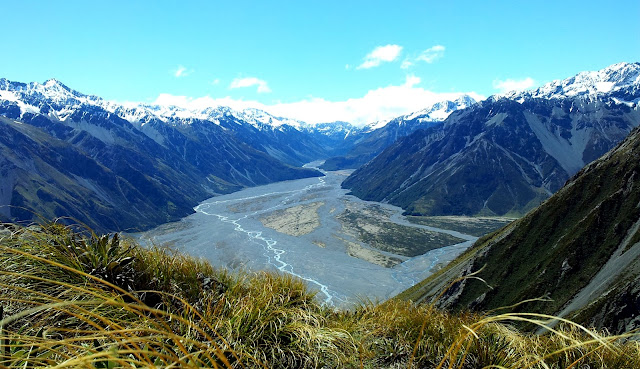 The Warrior, we bow for you.

Posted by Vincent Groenhuis at 11:28