Sinterklaas! Time to learn the Kiwis one of the most famous Dutch traditions of December 5th. Ok, with some minor modifications: because of the awesome weather we started with a tennis tournament followed by a BBQ! 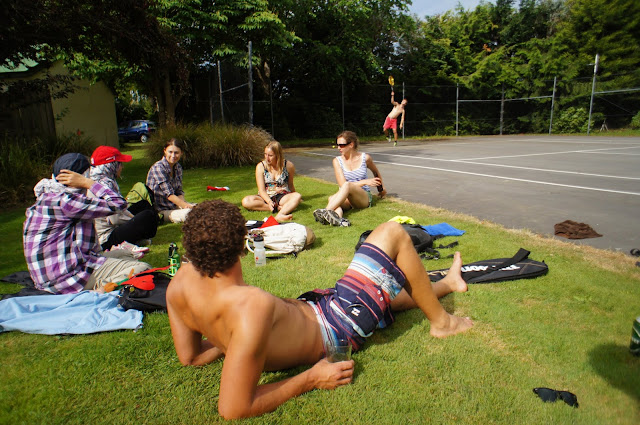 After the BBQ we played a dice game. Depending on certain rolls one could grab (or unwrap) a present from the large bag. Later, cards came into play as well, mostly shuffling presents according to dumb criteria which usually turned out our black pete Sandeep collecting most of them as he was also the only one wearing a moustache, beard and glasses, and apparently also being the biggest know-it-all of the house. Luckily there were many other types of command cards too, so in the end nobody got home empty-handed. Unfortunately no pictures by me of the Sinterklaas party or BBQ; Sandeep made a few and I hope to add them here later. 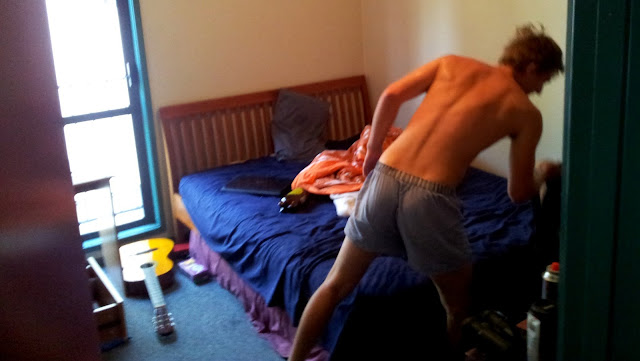 The Sinterklaas party ended very late on Friday, but we didn't get much rest as we planned to set off to Cass-Lagoon on Saturday by 8am. Well, at 8:30am everyone was present except Niko. He couldn't be reached by phone, so we drove to his flat and broke in through a window, finding him fast asleep in his room. I threw a cup of cold water over him, and this resurrected him quite well! A few minutes later, the nine of us finally set off to Cass-Lagoon, a 31 km walk crossing two main saddles and following rivers flowing through the valleys. 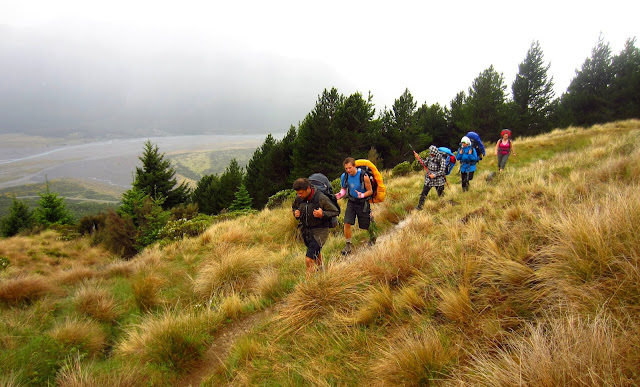 Rain. Yes, we learned: it rains when it rains and it keeps raining as long as it likes to do so. Trip leader Tania had wisely decided to start at the Lagoon side of the track, so that we didn't have to cross any rivers before reaching the first shelter, near the top of the Lagoon saddle. 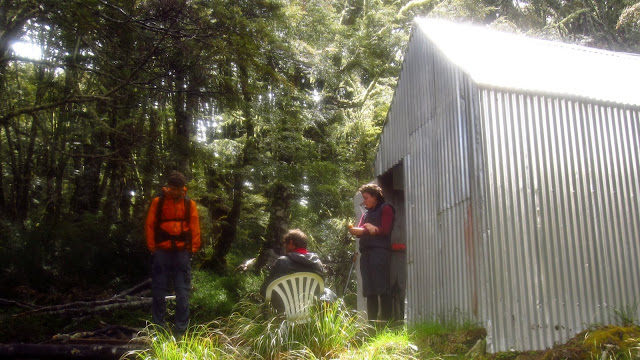 We had walked in good mood, but it became clear that the group pace was too slow to reach the next hut in time. So we decided to split up in two groups: the cracks going further, and the chicks staying at Lagoon saddle. 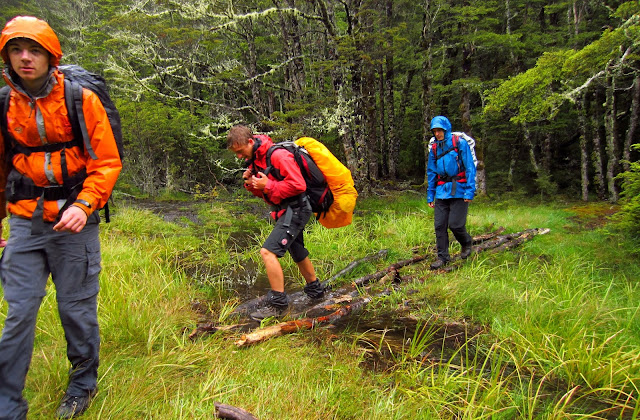 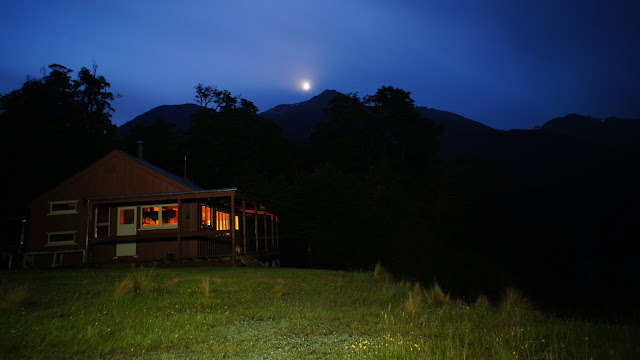 ...and finally we reached Hamilton Hut. We had a good dinner, and discussed plans for the night. I was keen for some long exposure photographing close to the hut, and Niko would go off to a valley near West Harper Hut and climb one of the peaks west from there. Yes, on his own on a rainy night. You just have to know him to understand him.

I walked from the hut to the stream at the other side of the valley. The low crescent moon was barely visible behind the clouds. Candles illuminated the hut from inside, giving a good guide for the way back. Apart from that, it was just plain darkness. I made a few nice shots, using my headlamp to illuminate the river and landscape and started my way back to the hut when rain was increasing again. The hut... where was it?

All the hut's candles were out, and I stared into the darkness. Oops. There you go: navigation at night without map, compass or GPS. Relax. Stay calm. Head into the approximate direction. Can't get further, was it right or left? An orange triangle, a track marker. Tried left. Wrong, of course: we had reached the hut through the woods, and not by the river, but my mind was running a bit slow. After 5 minutes I finally learned I'd better turn 180 degrees. Yes, found the pathway up to the hut! And I also saw Niko, shivering in front of the hut. 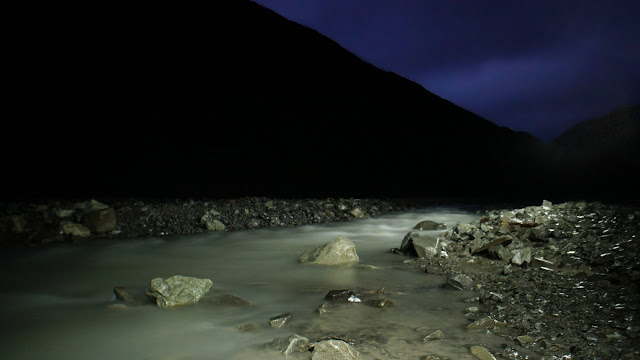 "Did you climb that peak?", I asked. "No", Niko replied, and he pointed to his Black Diamond headlamp on the ground. Dead. We lighted the fireplace and Niko told his story. Far away from the hut, his headlamp had suddenly stopped working!

An average tramper would be well-equipped with spare items and emergency stuff, especially when going out at night in poor weather. But not Niko, who had just his boots, shorts and shirt on. Not that he really needed spare or emergency stuff. Remembering the path he had taken, he managed to travel all way back to Hamilton Hut. River crossings in total darkness. Crouching on hands and feet to sense the stones and hills, listening to the streams that guided the overall direction. Many kilometres, about all way from West Harper Hut to Hamilton Hut. The longer I think about it, the more impossible I consider this achievement. Yes, it's always Niko... the craziest but also the toughest tramper of our club, I think! 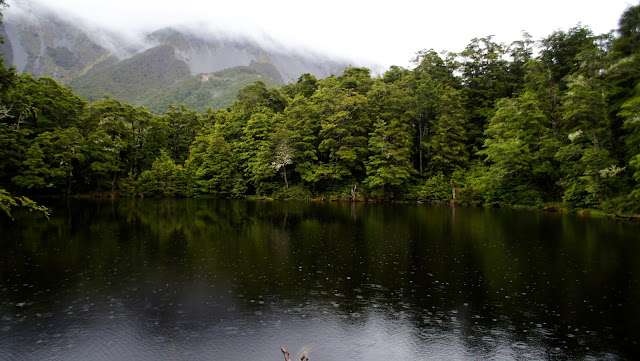 Next morning we first visited Mirror Tarn. Under good conditions it would be a nice spot for landscape photography, but this time the 'mirror' was broken by the ever-ongoing rain. 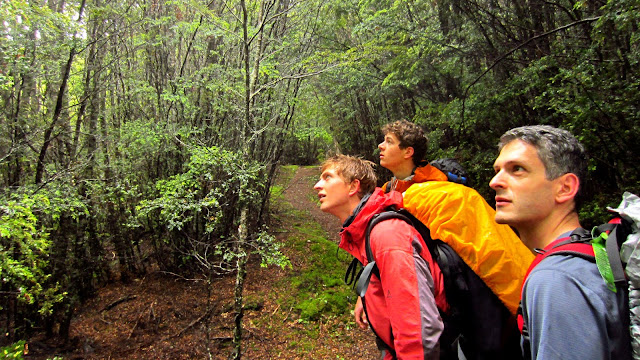 We then set off to the Cass saddle, climbing the hills through bush from where strange voices could be heard. 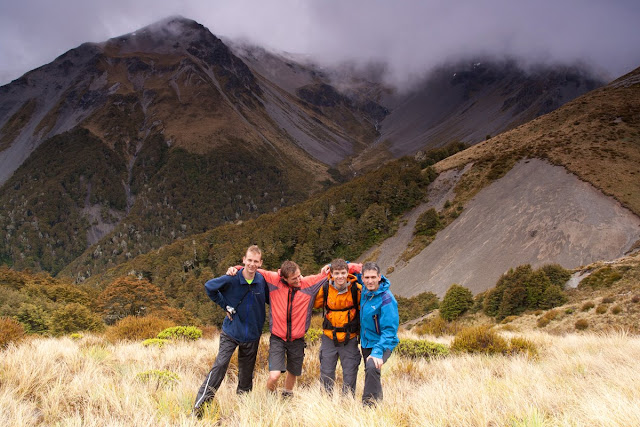 In the afternoon we arrived at Cass saddle. The photo above is taken by Milos, using a special camera filter to maintain good overall exposure balance (and a self-timer of course).

We then descended from the saddle along the Cass river. This started as a little stream (just a few centimeters deep and wide), and grew bigger and wilder as more side-streams flowed into it. At many places we had to cross the river, which was getting increasingly harder and eventually needed mutual support. 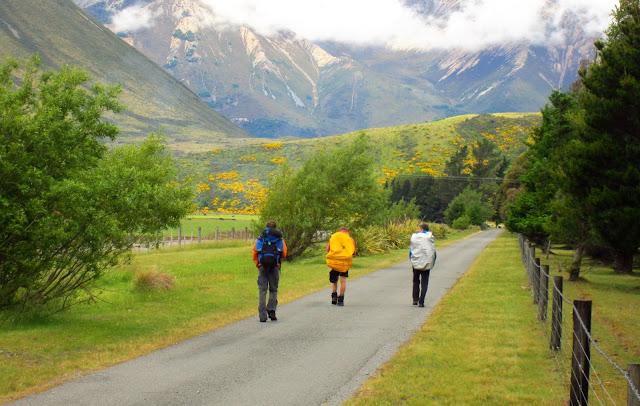 Finally, we reached the main road, soaked and with sore legs. This was the end for another nice tramp. It was quite wet, but still pleasing. And those nightly adventures... something you can keep on talking about for a long time!